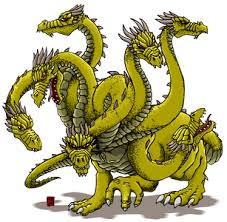 The Establishment Hydra with its seven heads – each one a party

Ed Miliband is Neil Kinnock Mark II and he may well go the same way. Americanisms such as Miliband’s ‘Hell, yes!’ and Kinnock’s ‘Well, all right!’ delivered in a nauseating phony transatlantic accent, are a turn off for the British. The immigrants may hold their nose and vote for him, in spite of his obvious insincerity.

The fellow may live in a £3million house with two kitchens, but he’s got no class.

In an hour long speech to the Labour Party conference last year, Miliband ‘forgot’ even to mention both immigration and the deficit, or what a Labour government under his leadership would do about either of these interrelated problems. That’s probably not only because he spoke without notes. It’s perhaps also because, deep down, he senses he will never head a Labour government.

The Con-Dem coalition government has allowed immigration at an even higher rate than the Blair-Brown Labour administrations. 624,000 per year is the latest estimate of the annual influx, the highest it has ever been.

And what about their ring-fencing, with Labour support, of foreign aid at 0.7% of GDP, equivalent to more than £13billion per year, at a time when they are supposedly trying to reduce government borrowing?

Does it make sense to trust the very people who created and aggravated these problems to solve them?

Vote for the Establishment Hydra with the seven heads, Lib-Lab-Con-SNP-Plaid Cymru-UKIP-Green and you’ll get more of the same treason: half a million immigrants from Asia, Africa and Eastern Europe every year, turning our towns and cities into open sewers of crime, vice and antisocial behaviour; billions of pounds of cuts in public expenditure tipping the economy into recession; billions of pounds borrowed at interest and then wasted on foreign aid to corrupt third world regimes; more bogus ‘green’ tax hikes; more zero hours contracts and fewer real jobs for our people; constant agitation for more high profile sinecures for immigrants and discrimination against our folk; more foreign flags raised over English town halls; more immigrant politicians pandering to Muslim paedophiles, buying votes with our children’s lives; more cuts in our police and armed forces, playing Russian roulette with the public safety and national security.

Why should you vote for a new political party like Patria?

Firstly, because, unlike the seven parties of the Establishment, Patria is not funded by wealthy donors that influence policy behind the scenes.

Secondly, because the Establishment Hydra with the seven heads is running scared of us. No, really, it’s true. In the battle of ideas they’re frightened to engage with us because they have no answer to the questions we pose.

Questions such as: why should we borrow £13billion or more at interest only to waste it on foreign aid, while our public services are cut, our welfare state is dismantled, our children burdened with a lifetime of debt to pay for their higher education and many of our people are reduced to using food banks?

And: why should we allow any immigration at all, when millions of our own people are unemployed or underemployed on zero hours contracts and need a home of their own?

This is the kind of question that Patria poses, on behalf of our people and to which the Establishment Hydra with the seven heads has no answer.

Instead of wasting £13billion every year on foreign aid Patria will invest it here in Britain to improve the lives of our people.

As well as deporting all illegal immigrants, foreign criminals, bogus asylum seekers, etc, Patria will: end all immigration for permanent settlement by persons not of British ancestry, so that employers are no longer able to employ cheap foreign labour at the expense of our own people who want and need jobs; and councils are no longer able to allocate social housing to immigrants at the expense of our people.

Each of the seven heads of the Establishment Hydra is pro-immigration, politically ‘correct’, Anglophobic, heterophobic, xenophile, Islamophile, europhile and multiracialist.

The Liberal Democrats – bigots who promote immigrants, closet homosexuals and paedophiles to top positions; ditto the odious Labour Party; ditto the wringing wet Conservatives, who conserve nothing but their own bank balance; the SNP – are economically illiterate separatists and think Braveheart was a documentary; Plaid Cymru – are separatists; UKIP – are pro-immigration and closet europhiles; the Greens – are both ecologically and economically illiterate.

Are Miliband, Cameron and the other cosmopolitan plutocrats ‘tough’?

Or are they traitors who have never done an honest day’s work in their lives? I think we all know the answer.

“A nation can survive its fools, and even the ambitious. But it cannot survive treason from within. An enemy at the gates is less formidable, for he is known and carries his banner openly. But the traitor moves amongst those within the gate freely, his sly whispers rustling through all the alleys, heard in the very halls of government itself. For the traitor appears not a traitor; he speaks in accents familiar to his victims, and he wears their face and their arguments, he appeals to the baseness that lies deep in the hearts of all men. He rots the soul of a nation, he works secretly and unknown in the night to undermine the pillars of the city, he infects the body politic so that it can no longer resist. A murderer is less to fear. The traitor is the plague”. Marcus Tullius Cicero, 58 BC.