The disenchantment of the soft option hunter 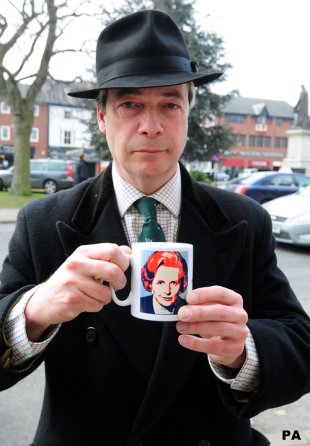 A souvenir from the shrine of the blessed Margaret, tutelary saint of tax avoiders

Should I say a few words about UKIP? I know some of you have enjoyed my exposure of that party for what they really are. So, perhaps I’ll just say a few more words about them and in particular about their prospects at the forthcoming general election on 7 May.

Despite all of the help UKIP has received from the Establishment media over the last six years: despite Farage having appeared on BBC Question Time more often during this period than any other British politician; despite all the other TV, radio and newspaper exposure he and his party has received; and despite the justified unpopularity of Lib-Lab-Con and the disintegration of UKIP’s main rival anti-EU party; despite the operation of all these factors in UKIP’s favour, it has largely failed to capitalize on them effectively.

Since October 2014 UKIP’s average poll rating has been in a gentle decline. UKIP’s national poll rating now stands below 15%. Instead of gathering momentum it is running out of steam, having shot its bolt.

Because the First Past The Post electoral system rewards parties for concentration of support, rather than evenly spread support, it is very likely that UKIP will fail to elect a single MP. At a general election, unlike a by-election, most voters feel that they are voting for a government, more than for an individual. Consequently, even the two Tory defectors, Carswell and Reckless, cannot feel confident about retaining their seats. And these are, or were, UKIP’s best hope of representation in the next parliament.

Other things to bear in mind when observing the media attention lavished on UKIP are: that the media build you up only in order to break you down later; and that if UKIP were going to make a breakthrough, their poll ratings would be at least three times higher than they currently are, because of the tendency of voters to revert to supporting the status quo, the main party of government, as polling day approaches.

There is also the over-exposure of Farage to consider. He has received so much exposure that certain unpleasant character traits have been noticed by the public. His ‘Hail fellow, well met!’ mask of jovial bonhomie, the bloke in the bar at the golf club image, has begun to slip.

In the weeks and months after the general election on 7 May UKIP is likely to fall victim to the over-egged expectations of its supporters and some media pundits. The fact that it has come as far as it has represents the victory of appearance over substance and of hope over experience.

When the Shangri-La of electoral triumph vanishes in the small hours of Friday, 8 May, what will be left to those who so eagerly jumped aboard the UKIP bandwagon when it still had all four of its wheels, but a hangover and a promise to themselves not to be so foolish in the future?

UKIP is the party of choice of the woolly soft option hunter. A party with no manifesto and an undemocratic constitution, led by a former commodities broker who tries to present himself as a patriotic man of the people, is phony. As phony as the made in China Union Jacks its supporters wave.