Social engineering at its most pernicious

The mass immigration of ethnic aliens from the Third World and Eastern Europe depresses the wages and working conditions of our people and creates unemployment particularly of the young. And this betrayal of our people has been deliberately engineered by the political Establishment. It has not happened by accident.

Protest against it, by organizing politically, as Patria has and the ‘mainstream’ media, who sell more newspapers by publicizing the immigration scandal, will refer to you as “far right”.

Opposition to the colonization of our country, by destitute hordes of ethnic aliens from the three corners of the world, is not a left-right issue at all, since immigration reached its highest point at more than half a million annually under the current coalition government and both they (openly) and UKIP (secretly) are committed to continuing the race-replacement of our people.

No, it is an issue which transcends the conventional left-right political divide. It is the most fundamental question of all: what kind of future does our people have if we lose our homeland, our patria?

English Britons are now in the minority in our capital city, London, in Slough, in Luton and in Leicester. Demographic projections tell us that we will be a minority in Birmingham, Bradford and Manchester by the end of this decade, if current trends continue.

Our children are in a minority in more than 1,600 schools throughout England and the number of mosques in Britain approaches 2,000. If our people are institutionally discriminated against now, as they are, in every walk of life, in education, in housing, in the courts and in opportunities for jobs, training and promotion, what will it be like for our children and grandchildren? What future do they have to look forward to?

The situation is grave. There is no denying it. But it is not hopeless. If only those of our compatriots who see the problem and are sufficiently concerned, decide to act, by joining or supporting a genuinely patriotic party like Patria, whose leadership is of proven character and untainted by the corruption and cronyism of the past, our homeland, our children’s birthright, may yet be saved.

Patria is as yet only small but it is growing fast and it has a big heart. We eschew petty internecine sniping, which historically has been the bane of nationalism, for the counterproductive self-indulgence it is and offer the hand of friendship to every other nationalist party, without exception.

The task is a monumental one, but it is achievable. Our forefathers faced challenges as great, or even greater and proved their mettle by overcoming them, together, like the band of brothers they were.

We can, we must, do no less today. 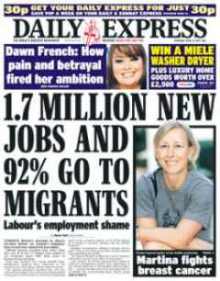