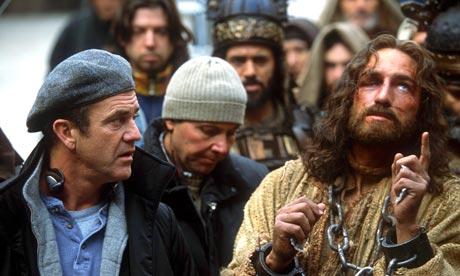 Jim Caviezel (right) says he has struggled to work in Hollywood since starring in Mel Gibson’s The Passion of the Christ. Photograph: Nick Cornish/Rex Features

The actor who played Jesus in Mel Gibson’s 2004 blockbuster The Passion of the Christ says he has been shunned by Hollywood since taking the role.

Jim Caviezel was a regular name on cinema hoardings before agreeing to take the lead in the controversial, bloody retelling of Christ’s final days. He headlined the 2002 remake of The Count of Monte Cristo and starred opposite Jennifer Lopez in the 2001 romantic drama Angel Eyes. However, Caviezel told an audience of churchgoers in Orlando, Florida on Saturday that he had “been rejected by my own industry” after choosing to join Gibson’s cast.

Gibson, he said, had initially offered him the role, only to call him back 20 minutes later and beg him not to take it.

“He said, ‘You’ll never work in this town again.’ I told him, ‘We all have to embrace our crosses,'” said Caviezel. He added: “Jesus is as controversial now as he has ever been. Not much has changed in 2,000 years.”

A passionate Christian, Caviezel told the audience at the First Baptist Church of Orlando he had learned to accept that the destruction of his acting career was a price worth paying. “We have to give up our names, our reputations, our lives to speak the truth,” he said. Though he labelled Gibson “a horrible sinner”, he said the actor turned film-maker should not be vilified. “Mel Gibson doesn’t need your judgment, he needs your prayers,” Caviezel said.

The Passion of the Christ was an enormous box office hit in 2004, taking more than $600m worldwide after attracting huge numbers of religious filmgoers. However, it was also the source of controversy with some critics accusing Gibson of antisemitism. Jami Bernard of the New York Daily News called it “the most virulently antisemitic movie made since the German propaganda films of World War II”.