Swiss voters have narrowly backed a referendum proposal to bring back strict quotas for immigration from European Union countries.

Final results showed 50.3% voted in favour. The vote invalidates the Swiss-EU agreement on freedom of movement.

Fiercely independent Switzerland is not a member of the EU, but has adopted large sections of EU policy.

Brussels said it regretted the outcome of the vote and would examine its implications.

This is the result the Swiss government and business leaders most feared: support for immigration quotas, by the tiniest of margins. In Switzerland the voters’ word is final, and the government will now have to inform the European Union that it wants to “renegotiate” its bilateral agreement on free movement of people. But renegotiation is almost certainly not an option [then renouncing it will be].

The Swiss have already had years to phase in the deal, and Brussels views free movement as integral to participation in Europe’s single market. Exclusion from that market could spell disaster for Switzerland’s booming economy: over half of all Swiss exports are sold in the EU. What is more, Swiss employers increasingly rely on highly qualified staff from across Europe – they believe they will lose their competitive edge if they are no longer free to employ who they like [let them train capable Swiss workers, as they did in the past].

But the right-wing Swiss People’s Party is jubilant that its claims of overcrowding, and pressure on Swiss jobs, salaries and housing, found favour with voters. The big question now is, how will Brussels, already under pressure from full EU members like Britain over the impact of free movement, react?

A Yes vote of more than 50% was needed for the referendum to pass.

The BBC’s Imogen Foulkes in Geneva says the vote has shown up traditional divisions, with French-speaking areas against the quotas, German-speaking regions divided, and the Italian-speaking canton of Ticino firmly in favour.

A Yes vote means Swiss ministers will have some tricky explaining to do in Brussels, our correspondent says. [Are they accountable to the Swiss people or to unelected foreign bureaucrats?]

In a statement, the European Commission said it regretted that an “initiative for the introduction of quantitative limits to immigration has been passed by this vote.

“This goes against the principle of free movement of persons between the EU and Switzerland. The EU will examine the implications of this initiative on EU-Swiss relations as a whole. In this context, the Federal Council’s position on the result will also be taken into account.”

“Faced with the negative effects of the pressures caused by immigration, voters wanted to send out a strong signal”

“This is far more than a political slap in the face”

“It can’t go on like this, the influx of foreigners is to be restricted: defying the government, parliament, the business community, trade unions and the overwhelming majority of the political parties, the Swiss people today gave the country’s economic policy a severe jolt.”

The vote comes amid increasing debate across Europe about migration and the impact of free movement of people.

Switzerland’s economy is booming at the moment, and unemployment is low, but many Swiss worry about immigration.

A quarter of the eight million-strong population is foreign, and last year 80,000 new immigrants arrived.

Since 2007, most of the EU’s 500 million residents have been on an equal footing with locals in the Swiss job market – the result of a policy voted into law in a 2000 referendum.

But a coalition led by the right-wing Swiss People’s Party now wants to reverse this deal, saying it was a huge mistake.

But the Swiss government and business leaders say free movement is key to Switzerland’s economic success, allowing employers to choose skilled staff from across Europe. 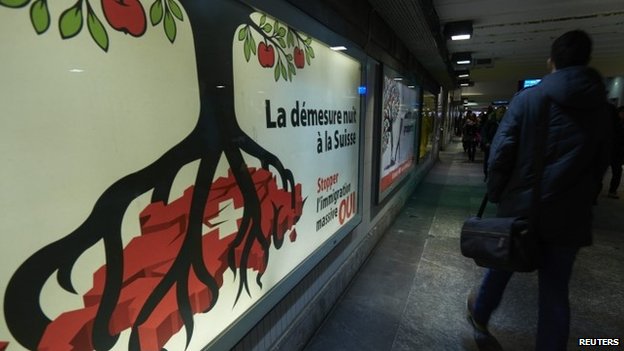 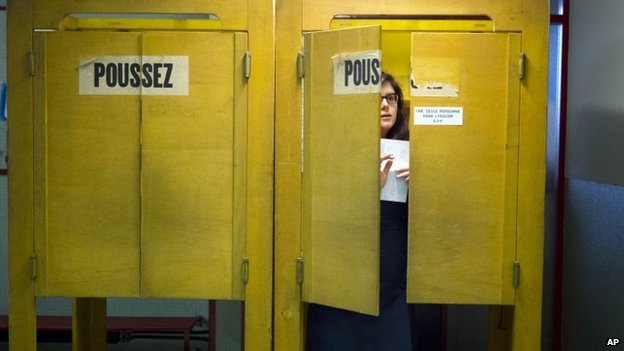 Switzerland’s bilateral agreements with the EU took years of negotiation to achieve.

Our correspondent says that abandoning free movement could limit Switzerland’s access to Europe’s single market, [nonsense, if Norway can have its cake and eat it so can Switzerland] where over half its exports are sold.